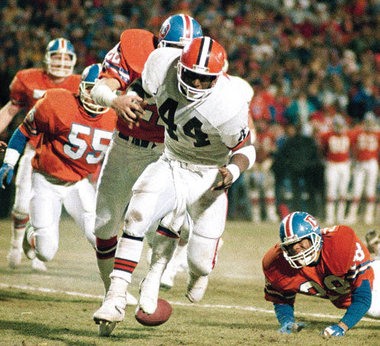 Strategic Commitment: The Secret to a Seamless Innovation Handoff

If you’re a sports fan from Cleveland (home of Newry’s HQ), you know misery. Prior to the Cavaliers winning the 2016 NBA Championship, we endured an unprecedented 52-year, 147-season championship drought. That’s not to say we didn’t get close some years – oh, we got close. But of all the disappointing near-misses in Cleveland sports history, perhaps the most painful of all was “The Fumble.”

One year after an embarrassing defeat by the Denver Broncos in the 1986 AFC Championship Game, the Browns were back for a rematch. Trailing late in the 4th, Browns running back Earnest Byner took the handoff to score the touchdown that would pull his team within one point of their opponents.  And while some say that the ball was stripped – on the one-yard line with 1:12 left on the clock – the legend remains “The Fumble.”

What, you might ask, does this lesson in Cleveland sports history have to do with innovation? Actually quite a bit (although, thankfully, usually less public). The R&D process is the grinding drive down the field. Time-outs get called to reevaluate strategy, key players get substituted, and by the time your team has made it to the one-yard line, the only reasonable outcome should be a newly recognized revenue stream: a “score.” But just like Earnest Byner, some technology innovators fumble. And just as Cleveland fans have watched teams get oh-so-close to winning it all, at Newry, we’ve watched companies do the same.

There are a variety of ways these fumbles happen, but the departure of key players seems to be especially ripe for disaster. One of our longstanding client companies encountered this situation twice, with two drastically different outcomes, providing an almost perfect control study of the impact of leadership and cultural commitment in the innovation process. The lesson learned? To sustain growth initiatives over time and through turnover, you need a strong organizational commitment to execution – one that goes beyond the individual player and extends deep into the whole team’s culture.

“The Fumble”: In 2006, we were engaged by a company whose principal businesses were closely tied to the building industry.  They had invented a novel device for a core application, and asked us to find adjacent opportunities for their technology.  Working with the division manager, we found some great options – real brand partners who recognized the value of the product and were eager to engage.  Meetings were set up, introductions were made, specifics were discussed. And then, the division manager announced he was taking a job with another company.  The organization had a clear line of sight to millions in sales, but they dropped the ball.  The program ended on the 1-yard line.  No hand-off, no successor, no revenue.

“The Save”: A decade later, we were working with the same company. Our client had developed two more innovative products, both very much a stretch for their capabilities and years in the making, but with lots of potential to grow their business.  But on the equivalent of the 10-yard line, it happened again: not one, but two key people left the company.

As we had ten years prior, we braced for disaster – but it never came. The products were transitioned to new teams and there was a virtually seamless handoff.  The innovations could have easily been orphaned much as it had been 10 years earlier.  What was the difference?

In 2006, the culture of our client’s company was very conservative.  The focal point of their strategy had always been to keep their current customers happy.  When the building industry (already notoriously risk-averse) was walloped by the economic crisis, their focus on protecting their existing businesses became even more pronounced.  Pursuing adjacent opportunities was outside of their comfort zone, and no one wanted to stick their neck out when the division manager departed.

In 2016, however, the company underwent a substantial reorganization. Leadership recognized that in order to grow, they would have to consider opportunities outside of their comfort zone, and they took strategic steps to transform their business.  And perhaps more critically, they were (and continue to be) committed to those strategic decisions.

To sustain growth initiatives over time and through turnover, you need a strong organizational commitment to execution

In retrospect, that change in mindset was perhaps the most critical element of “The Save.”  In 2006, there was no transition plan, and perhaps even a sigh of relief when this uncomfortable excursion came to an end.  In 2016, there was good overlap between key players in the transition plan, but the key difference between 2006 and 2016 was a cultural determination to execute on strategic initiatives, reflecting the familiar battle cry “Innovate or Die”.

Finding a great opportunity to “score” – a great market, application, or customer for your technology – takes an immense commitment of time, talent and capital for any company.  Lost opportunities, whether they cost your team a championship, or cost your company millions of dollars are painful.  Companies can avoid living their own versions of “The Fumble” by fostering the strategic commitment to secure smooth handoffs and avoiding costly – and heartbreaking – innovation losses.

Amy Fritz has been a member of the Newry team since 2006, offering her expertise and insight on varied subjects including green building, wireless communications, architectural glass, and medical diagnostics systems. In addition to her consulting work, Amy has been deeply involved in the firm’s marketing and knowledge management functions. She enjoys continuously tackling interesting and diverse tasks, and loves her work at Newry because every day is a new challenge.