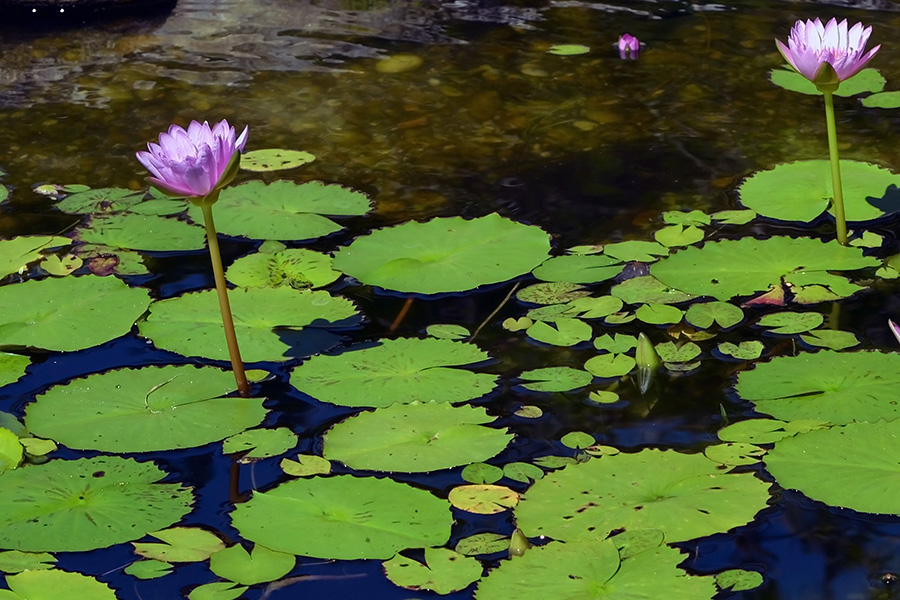 One of the biggest challenges facing business strategists is how to grow profitably. Should one grow by stealing market share from weaker competitors? By edging into adjacent markets or incrementally improving existing products and technology? Through acquisition, bolting on new organizations to get big fast? By placing a big bet on some new market or technology “white space?” Or is there another, better way to grow without risking stagnation, or overpaying for an acquisition, or swinging for the fence and striking out dramatically?

One alternative that we’ve found works well is an approach we call “lily pad strategy.” It combines the big vision of the “swing for the fence” approach with the incrementalism and relatively lower risk of edge-out strategies.

To understand how and why it works, though, it’s worth first exploring the workings and pitfalls of some conventional growth strategies:

Each of these strategies has its strengths, but each too has significant drawbacks: stealing share and growth through adjacencies are reliable tactics but rarely produce truly exciting results; growth through acquisition and white-space innovation, on the other hand, can lead to big leaps in growth, but they’re risky. So, where do you turn if you want to grow, but none of these approaches really seems to make sense?

One of the biggest challenges facing business strategists is how to grow profitably.

Lily pad strategy is an answer to this challenge. In the lily pad model, a company takes a series of planned moves from one business position to another, successively reducing the commercial and technical risk of getting to the “next big thing.” Individual steps – lily pads – are designed to be places of relative safety with opportunities for rich learning and sometimes even self-funding. In the course of progressing from lily pad to lily pad, the company develops market knowledge and competitive advantage without ever having to face the exposure involved in swinging directly for the fences, and stands a much greater chance of reaching their end goal unscathed.

One excellent example of lily pad strategy in action is Corning Incorporated and its now-hugely-profitable LCD business. When LCD devices – calculators, watches, etc. – first became available in the 1970s, early marketing work showed that TVs and CRTs could one day become LCD flat panels, and that Corning might well provide a critical enabling technology. So, Corning began the 20-year wait for “one day” to arrive.

They were not idle in the interim, however; they sold precision flat glass for every conceivable kind of LCD device, a whole host of applications that had nothing to do with TV or laptops. The lily pads on which they alighted sustained technology development, provided time for Corning to understand the market, and generated some much-needed cash to sustain the business. Today, Corning’s LCD glass business generates billions of dollars in free cash flow. Had Corning directly pursued LCD TV from the beginning, the product would have been dead 15 years ago, but by adopting a lily pad strategy, their product endured 20 years of up-and-down investment and is now wildly successful.

In the course of progressing from the lily pad to lily pad, the company develops market knowledge and competitive advantage without ever having to face the exposure involved in swinging directly for the fences, and stands a much greater chance of reaching their end goal unscathed.

So, the idea seems simple. Is it too simple? Can it actually work?  At its most fundamental level, the lily pad strategy is the essence of entrepreneurial strategy: Establish a vision, plot a path of relatively low-risk, low-investment, high-learning steps. If things do not go as well as expected, rest on the current lily pad and replot your course. If things go badly, retreat to the previous lily pad. If things go unexpectedly well, accelerate your hopping or jump over some lily pads to achieve the vision even more quickly. The trick is to have a clear vision of the ultimate prize and a sense of the key risks; be creative about lily pads that can advance your learning while minimizing the investment and effort required; remain flexible and willing to adapt your plan as reality unfolds.

Read more about how Newry used the Lily Pad Strategy for a client!