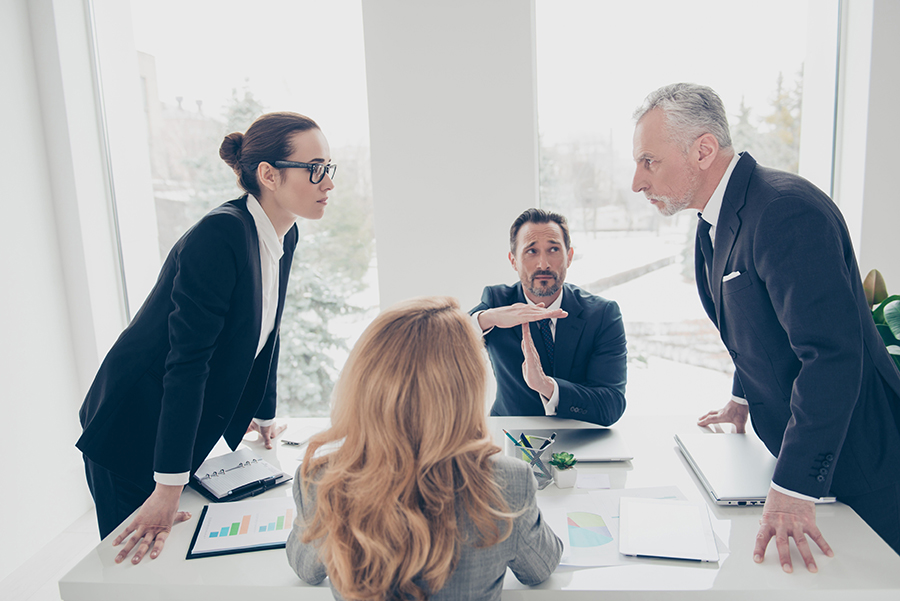 Encouraging dissent can be an uphill battle. No matter what individuals may think of an idea privately, they are often unwilling to bring up their reservations out of fear they’ll be perceived as pessimistic, overly critical, or not a team player. During the Q&A portion of a talk we gave recently, one audience member remarked:

We don’t always hear this attitude expressed so candidly, but we see it all the time – a widespread reluctance to speak out, even if there’s good reason to.

Some of the most successful companies we know have tackled this problem by intentionally cultivating a “high conflict, high respect” culture. High conflict, high respect, a concept we learned from Rebecca Henderson of Harvard Business School, is built around an emphasis on truth-telling that transcends hierarchy. In organizations that have built this culture, folks have very little ego about their own ideas, simply because expectations and incentives have been established that encourage them not to. As a result, they reliably put the interests of the collective ahead of their own. When they see a problem, they say something.

No one wants a working environment where people tear each other down all the time.

As with any culture-oriented initiative, fostering this kind of attitude throughout an entire organization is extremely challenging. It can take years, if not decades, to instill new norms and practices, not to mention unwavering commitment from leadership. Also, this specific initiative is particularly tricky since there’s a very thin line between “honest” and “mean,” and the last thing you want is a working environment where people tear each other down all the time. Unfortunately, there’s no shortcut to getting it right – it’s just a matter of hard work, commitment, and time.

Fortunately, while you do the hard work of instilling a culture of truth-telling across your organization, there are a handful of techniques you can use to simulate a high conflict, high respect environment temporarily. Most companies already use some combination of social mechanisms – workshops, brainstorms, formal and informal meetings, etc. – to get folks talking to each other. We’ve found that once people are in a room together, there are a few facilitation approaches that work well to ensure those people share their honest opinions, raise real concerns, and engage in spirited (and civil) debate:

In situations where folks might be reluctant to speak up against an idea, one of the simplest and most effective ways to elicit contrary viewpoints is by designating one or more members of the group to be “Devil’s advocates,” or naysayers. When people are assigned a role that requires them to point out weaknesses or shortcomings of a plan, they are generally much more forthcoming than they would be otherwise. They aren’t being pessimistic – they’re just doing their job!

When we get to a point in a brainstorm or workshop that calls for critical feedback, we like to do an exercise called “Love It/Hate It.” In this exercise, one person receives a stack of green post-its and has to write down at least one aspect of the idea being presented that they think is particularly strong, while another person receives a stack of red post-its and has to record at least one thing they think is misguided. Everyone discusses those inputs, and when the group moves on to the next idea, the post-its get handed off to two new “Love It/Hate It” representatives. 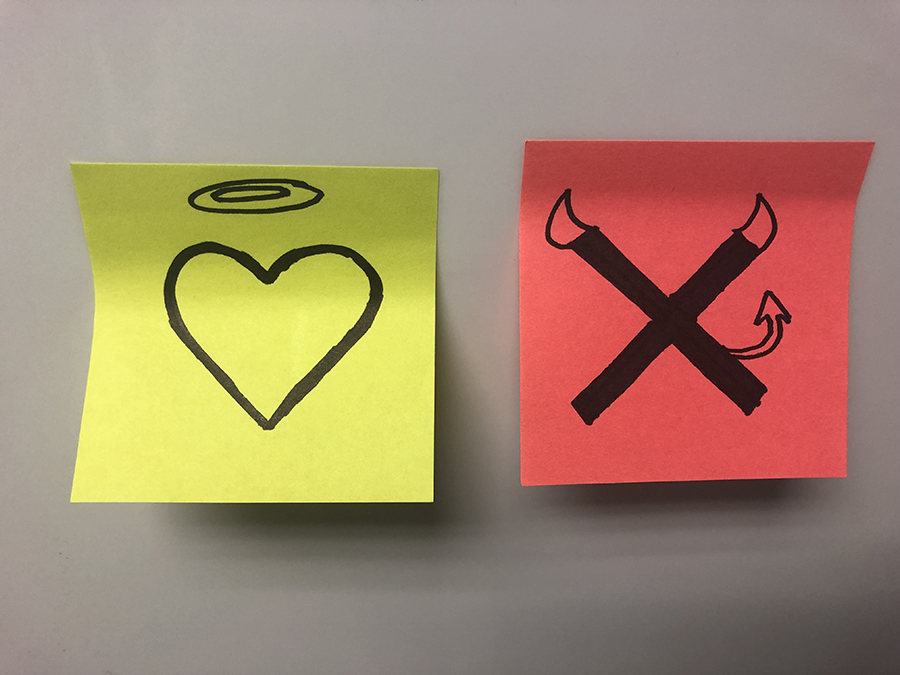 This exercise has a number of benefits: first, it forces the airing of at least one grievance (which opens the door for the airing of other potentially repressed grievances). Second, it pairs criticism with constructive input – the essence of a high conflict, high respect interaction. Third, in most cases, everyone has a chance to play both sides, which compels the more passive team members to get involved in the conversation.

Similar to Devil’s advocacy, the War Game exercise involves assigning stakeholders a particular point of view and demanding that they do their utmost to defend it. However, whereas a Devil’s advocate is a singular voice, War Games tap into the power of our competitive instincts by splitting the whole group into teams and pitting the two sides against each other for a set period. Once the time period is up, everyone drops their roles, and the group debriefs on the debate, working together to determine which of the points brought up merit further exploration; typically, there are at least a few major concerns on the table that weren’t there before.

3. Put an elephant in the room

Depending on the duration of the workshop and the configuration of the room, it may be useful to designate some wall space as a venue for miscellaneous issues or concerns that arise as the session progresses. For Newry workshops, we like to bring along this large and very tasteful poster: 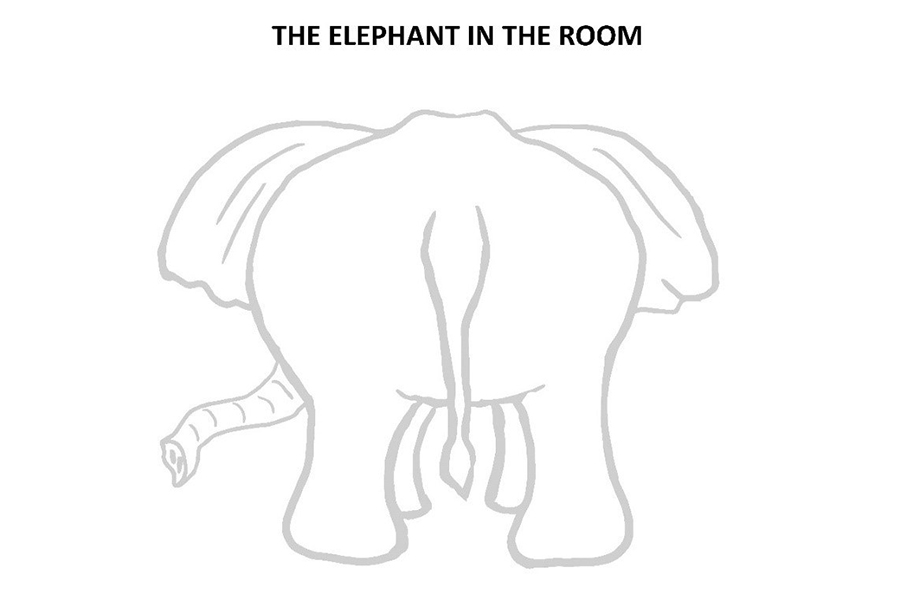 This poster gets taped up in a relatively inconspicuous part of the room with a stack of sticky notes and markers in front of it. If there’s an issue that no one is comfortable voicing aloud, or if someone feels that a particular critique hasn’t gotten the time and attention it deserves, participants can write down their concerns and stick them up on the poster directly, or hand them off to the facilitator if they want to be anonymous.

How the topics on the elephant are handled at the end of the day depends on the sensitivity of the subject matter and the people in the room, but they can often be addressed as part of a broader wrap-up conversation. If nothing else, this commentary usually gives the group leader a pretty good sense for what their team members are really worried about.

Dissent is a healthy, crucial element of good decision-making. Admittedly, not every team deals with a lack of dissent – some organizations struggle with the opposite problem of trying to reign in the critics – but in a culture that champions “positivity” and “creative problem solving,” not to mention respect for authority, many find it challenging to get real, honest perspectives from their team members. These facilitation techniques, while not anywhere near as powerful as large-scale, authentic shift in company culture, can be very effective on a small scale, and may be just the thing you need if you’re looking for high conflict, high respect interactions in your next workshop.