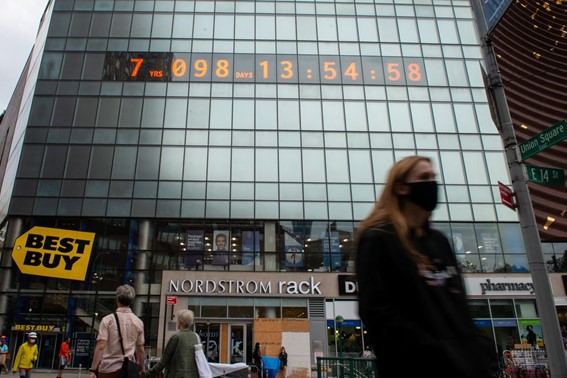 In September of 2020, a new digital clock was unveiled in Manhattan, plastered to the side of a building off Union Square. Known as the Climate Clock, it shows the time left until society burns through the planet’s carbon budget based on current CO2 emission rates, at which point temperatures will rise 1.5°C over pre-industrial levels, causing irreversible change to our natural ecosystems. The display conveys a sobering message about just how little time there is left to act on climate change.

The climate clock in NYC (Forbes)

Newry works with some of the most innovative material and chemical producers in the world. Many of these players are increasingly recognizing the opportunities that the climate crisis presents and are ready to move. Rather than looking at the time on the climate clock as a doomsday ticket, I like to view it as an innovation runway – the time corporations have left to strategize, develop, and begin to execute on new technologies and services that are good for both business and the planet.

At the heart of the climate problem is the emission of vast quantities of CO2 – 33 Gt in 2019 – from burning fossil fuels for transportation vehicles, power generation, and material goods production. Adoption of clean technologies like renewable energy and electric vehicles has been the primary way in which countries have aimed to curb emissions and mitigate their climate impact. In addition, carbon capture technologies (e.g., amine scrubbing systems, membranes, etc.) are increasingly being adopted in industrial sectors to prevent generated CO2 from entering the atmosphere.

Unfortunately, strategies like these simply are not enough to solve the climate crisis because a large portion of emissions will be too hard to abate through technology or too expensive to capture. Furthermore, even if society stopped emitting CO2 tomorrow, we would still feel the impact of all the CO2 that has already been emitted and now is sitting idle in our atmosphere.

That is why we need to actively take CO2 out of the atmosphere through strategies known as carbon removal.

Carbon removal, deployed in conjunction with conventional emissions mitigation strategies (renewables, carbon capture, etc.), could help stabilize the global climate, but the need is enormous and urgent. Some climate models predict that by 2050 we need to be removing 10 Gt of CO2 from the atmosphere (roughly 1/3 of 2019 global emissions) every year to meet climate targets. By 2100, the need increases to 20 Gt/year.

The good news is that there are many known methods for removing historical CO2 from our atmosphere and more being developed. Trees do this every day as they photosynthesize. Indeed, most of the carbon removal solutions that exist today are biological. The bad news is that these biological solutions have limited or unclear capacity to scale up – reforestation is a critically important activity, but it cannot come close to removing 10 Gt of CO2 per year on its own.

The exception to this rule is a relatively new strategy known as Direct Air Capture or DAC, which is an engineered carbon removal solution. Imagine giant machines that suck air in on one end, filter out the CO2, and then spit the cleaned air back out the other end. As DAC is a technological carbon removal solution, it offers massive scalability compared to other biological solutions – a single DAC plant could do the work of 20 million trees per year and would require 40 times less land area. Today’s DAC installed capacity is only on the order of ~15k tonnes/year, but the world’s first large-scale DAC plant is scheduled to open in 2024 and will capture 1M tonnes of CO2 per year.

The biggest barrier for scaling DAC capacity today is cost, which stems from the difficulty of filtering the low concentration of CO2 in the air (only 0.04% or 400 ppm) effectively. For DAC to become adopted more broadly, costs must fall; estimates for first-generation facilities (which can cost hundreds of millions of dollars to construct) range from $250-600/tonne of CO2 captured. Driving these costs down will require significant innovation in both materials and system design.

The “winning” technical approach for DAC has yet to be established (and there may be more than one, given the massive amount of carbon removal required to hit climate targets), but the leading solutions today share some basic elements:

Leading DAC players are still experimenting with the configuration of components that will maximize the efficacy of the system, and their suppliers are continuously improving the components themselves.

Sorbent/solvent technology in particular is a major driver of DAC system economics: in some systems, the sorbent material used to capture the CO2 accounts for more than 50% of total system costs over the plant lifetime. Development and bulk production of sorbents is therefore critical to promoting widespread DAC adoption.

While this materials innovation is ongoing, support of governments through policy (e.g., tax credits and incentives, direct funding, etc.) will be crucial to get early DAC projects off the ground. Fortunately, federal governments are demonstrating a strong appetite for funding carbon removal; this year, for the first time ever, Carbon Removal has a dedicated budget line in a US Presidential Budget Request (for FY22). Numerous private incentives have emerged as well, including a $100M competition funded by Elon Musk, which has set off a cascade of activity in the industry. Together, public and private funds are assisting in the critcal research and deployment of promising DAC technologies that will enable the industry to scale rapidly.

It is time to reframe the climate crisis as the climate opportunity, and DAC has the potential to be one of the greatest opportunities within climate tech. Firms that can cultivate diverse relationships across the ecosystem (technology providers, financers, system integrators, project developers, etc.) and provide differentiated system performance will ultimately be the big winners in this emerging market, which implies an exciting opening for materials companies and non-traditional players alike. While this market is certainly not saturated today, and likely will not be for another decade, the time is ripe for new entrants who are eager to innovate and address one of society’s greatest challenges.

The climate clock is ticking.